The Story of a Font 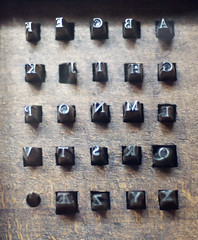 The original Garamond Typeface Punches (by Peb a)

When we’re scrolling through the list of fonts in our word processors, looking for the perfect combinations for printing, not many of us stop to consider where they came from. It might not seem a particularly interesting topic, but, cast your eye over the line of text you’re reading now. Each of the letters in that line had to be designed by someone; a decision was made about the thickness and height of every “h” and the size of the “hole” of every “o.” Each letter has to fit in with its brothers and sisters along the line. A good font is a masterpiece of design, and some of them have histories that go back to the birth of printing.

Garamond is a font you might have heard of: in the later years of the last century it was made famous by Apple, who used it in nearly all of their advertising and documentation. The name Garamond originates with one of the creators of the font,  Monsieur Claude Garamond, a punch-cutter from France. Punch cutters are the people who made the metal shapes from which letters were cast back in the days of letterpress printing, before modern laser and inkjet technologies (as in the image). Garamond lived in the late 14th Century and was responsible for — among other things — the introduction of the apostrophe into the French language.

So, where does a punch cutter start when he wants to make some new letterforms? At the time many documents were still handwritten, because printing was a fairly clumsy and expensive technology, so those that wrote documents had beautiful calligraphic handwriting. Garamond’s lowercase letters are based on the handwriting of the librarian of King Francis I, Angelo Vergecio, and the italics on the writing of Garamond’s assistant, Robert Granjon. There is a font today named after Granjon, which is actually very close in design to the earliest Garamond.

The typeface we call Garamond today, is, in fact, a little different from what Garamond created. Several decades after Garamond’s death, a different printer, by the name of Jean Jannon released a somewhat similar looking typeface. Jannon got himself in trouble with the French government, who raided his office, and took his typeface. Cardinal Richelieu — the one from the Three Musketeers — took a shine to it, and made it the official typeface of the Royal Postal Service. When, following the revolution and the reign of Napoleon, the French National Printing office adopted it, they misattributed Jannon’s font to Garamond, and 20th Century designers used Jannon’s “Garamond” as the basis for their designs.

Through five centuries, the Garamond that sits in your font selector, and until recently adorned almost everything Apple created, has been used for printing everything from official French government publications to the picture books of Dr Seuss. Most typefaces have a story to go with them, so should you care to explore the content of your font selector, you’ll find a rich world of history to delve into.

2 Responses to “The Story of a Font”