Ethernet is a networking standard that was designed to simplify communication and data transferring for an office environment.  Previous connection options, such as parallel and USB ports would limit machines to single-user capabilities.  Ethernet opens the door for multiple users to share a printer, among other things, thus saving the company ample space and time.  A standard ethernet interface is compatible with all major operating systems but will require the right wiring and hardware. 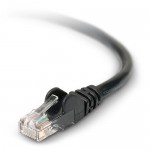 Users that are within a small area can use a LAN, which is a local area network.  This allows them to send and receive data through the network but requires a central hub or switchboard.  “Packets” of data are sent along the ethernet connection line.  This data is delivered by the main hub, but pushed by passive machines to be distributed to the proper place.

Networking is the main addition that ethernet can provide to an office, both in data transfers and in shared printers, such as in the Dell 5110CN in which networking is represented by the ‘N’ in the model number.  Rather than every PC being connected to an individual printer, networking allows an office to have a central printer, or even multiple central printers.  Ethernet cabling connects the printer to the same hub that all of the computers in the office are connected to.  Thus, every connected computer can share the printer. Users can then choose which printer to send a document to, possibly choosing different printers for different types of tasks.

The average ethernet found in the majority of small offices and homes is 10Base-T interface, which has the ability to send 10 megabits of data per second.  This pace should appease the needs of most low-volume users.  However, offices that require fast-paced transmissions should consider the 100Base-T ethernet interface.  This works at 10 times the speed of the original option.  Newer protocols such as Gigabit Ethernet can provide even faster speeds. Whichever speed suits you better, networking  can be a crucial addition to the efficiency and overall productivity of an office.

Here is a more detailed explanation of ethernet: