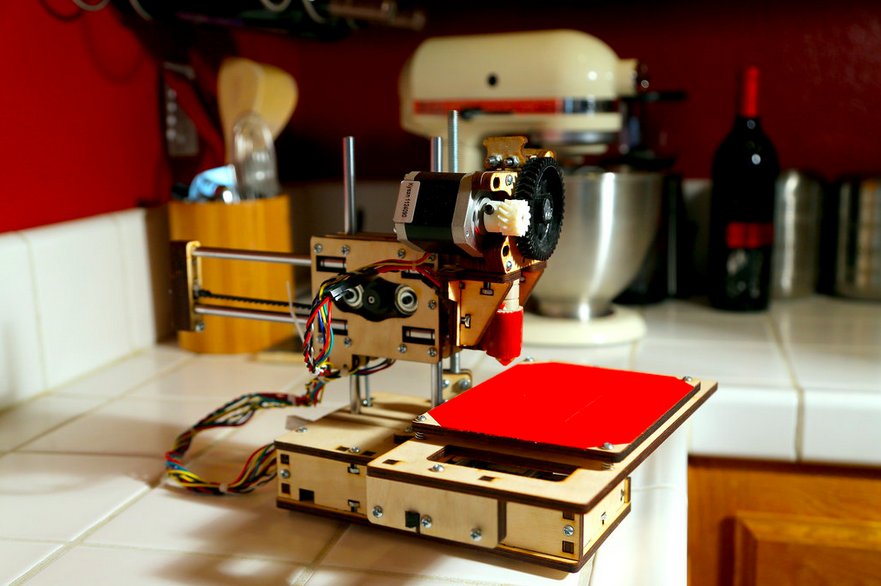 “No the machine is broken.”

“Well can you fire up the P-bot and make a new one? I can’t open my eyes…”

“Only if you promise to take out the garbage!”

How far away are we from having conversations like this one in the average American household? Far enough, but we can see it on the horizon:

Max Lobovsky, one of the creators of the Form 1, a desktop 3-D printer that is stunning in both its design and printing quality, said the home 3-D printer is at a similarly protozoan evolutionary stage. ‘It’s not just about technology or reducing costs,’ Mr. Lobovsky said. ‘The machines need to be easier to use, more capable and offer more applications in the home. I think all of those things are missing today.’

(We talked about the Form 1 back in January.)

Imagine it. Imagine dialing up a rolodex of design apps on a touchscreen on your countertop 3D printer, scrolling until you found “Coffee Maker”, pressing “Go” on your printer and voila! A matter of minutes later you have one and the beans are percolating. Sounds a little ridiculous right?

Well we did a quick search on Thingiverse for “3D Coffee Maker” and, while a design for a complete maker doesn’t seem to exist yet, you can download the plans for a scoop right now! In other words, it really is only a matter of time before we’ll literally be able to print working versions of common household appliances and items from the kitchen counter.

The “hot end” of the Printrbot Jr.

The Times opens their article talking about another Kickstarter success story, the Printrbot. What’s really intriguing about Printrbot is that it’s an out-of-the-box, do-it-yourself 3D Printer, the junior version of which sells for just $399. In the kit: “All the hardware, wood, electronics, bars, and motors needed to build a Printrbot jr, as well as 1lb of 1.75mm PLA filament.” We may have just found a spring project…

So desktop 3D printers are a reality, although they’re a few thousand bucks right now. Printrbot will sell you a kit to make your own for $400 and a swiftly growing population of enthusiasts are designing and uploading free plans for printing real things to a free website.

“Honey!! Print me a new set of keys…I can’t find mine anywhere!”