Our Favorite Part of the Oscars: Appreciation

The gowns, the speeches, the crazy hosting of Ellen DeGeneres. There was so much to love this year. But the thing that topped our list was appreciation.

No one at the Oscars could have gotten where they were without numerous other people who weren’t invited to the ceremony: the family members who supported and encouraged them, their fellow cast members, the numerous people in the movie industry working hard to make them look good, and the adoring fans who watched their movies throughout the years. 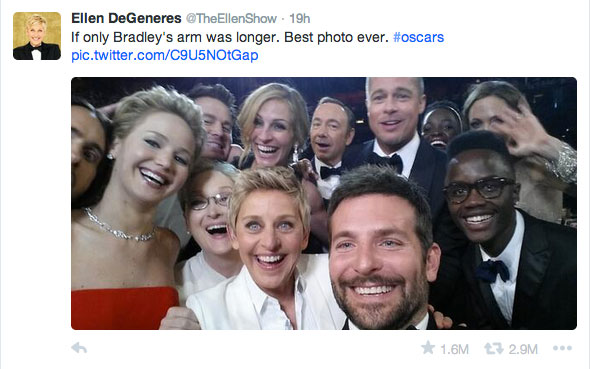 Our gregarious hostess shattered Twitter’s retweet record of 780,000 in less than 34 minutes, and was also the first user to surpass 1 million retweets for a single Twitter post. But all Ellen did was snap a picture. It was up to the millions of people watching from home to break the record for her.

Sure, Cate was a realistic mess in Blue Jasmine, but she was classy in her Oscar acceptance speech, where she began by complimenting the other nominees. She went on to talk about how “audiences want to see them [films with women at the center], and in fact, they earn money. The world is round, people!” She called her husband a legend and her agent a goddess. She finished up by thanking her co-star “the sublime Sally Hawkins” and the extraordinary cast of Blue Jasmine. “I don’t know how to do this without other actors, and this [Oscar] I share with you.”

Not only was his performance in Dallas Buyers Club heart-wrenching, his gracious speech struck a chord, as well. Thanking his mother first and foremost, he paid tribute to the 36 million people who lost the battle with AIDS. He finished with “anyone who’s ever felt injustice because of who you are and who you love, tonight I stand here with you and for you.”

We here at Ink Technologies owe everything to our loyal customers. In the spirit of the Oscars, we’d like to share our appreciation. We wouldn’t be where we are today without you!