History of the Inkjet Printer 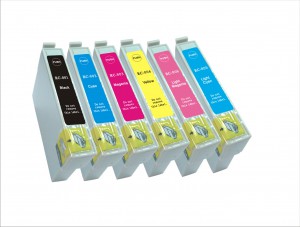 They started as an idea in the early 1950s, but by 1970, inkjet printers that could reproduce digital images on computers had hit the market.  In 1980 they landed in the consumer market, led by HP, Canon and Epson then eventually the IBM spinoff company Lexmark.  They eventually made their way into the homes of millions of people.  In the early days, two different technologies were introduced, though one has become the clear favorite.

This uses high pressure pump to push electronically-charged ink droplets through a tiny nozzle.  This technology is clearly the fastest, allowing machines to print pages in less than 3 seconds.  However, a lot of ink tends to be wasted because it lacks precision, some of which are recycled.  This method of printing is still used in industrial settings. For instance, some businesses use it for printing on the outside of cartons.

An illustration of the two major drop on demand inkjet technologies.

Introduced in 1977, this technology also uses nozzles, but has the control to spray ink only where needed.  Because it is more modified, units using this technology are slower, but more cost-effective.  DOD can be broken down a bit further into two more specific methods: piezo-electric and thermal.  Piezo-electric is most commonly used for commercial printing as it tends to be a bit more expensive to produce, though Epson and Brother use the technology for some consumer models.  Piezo-electric printers use static charges to push the ink through the printhead nozzles. Other manufacturers, such as HP, Canon and Lexmark, use thermal technology to push droplets out of the nozzles, which is a much more affordable and popular technology.

Inkjet printers are accurate, precise and affordable, and have continued to evolve over the past several decades. Today, most consumers have an inexpensive inkjet model in their home that is more advanced than a model that would have cost thousands of dollars in the 1980’s!